There can be no keener revelation of a society’s soul than the way in which it treats its children.  -Mohandas Gandhi

When I was a child, I had a good friend who had a difficult home life.  One night, she came over to my house and told my mom and me that her mom had physically abused her.  Mom checked her out, and she was physically OK, but she was definitely shaken and emotionally harmed.  Our moms were both single moms, and they relied on each other and both took care of each of us.  That night, my mom called the police to report her friend for child abuse.

It’s only as an adult that I realize how difficult it must have been for my mom to call the police and report her friend and neighbor, risking their friendship, Mom’s peace in the neighborhood, and my friendship with her daughter.

But my mom loved this child as if she were a daughter.  So, for her sake, she did the right thing and called the police.  Mom’s actions were courageous.  She put the child first, over herself and over the other adult in the situation.

That’s what it means to be child-centric.  It means putting the child first. I never would have thought I’d need to make an argument that we should put kids first.  Strangely, though, there are those who argue, though not explicitly, that adults’ needs should come before children.

The Sonya Hodgin case, recently in the media, is an example of child-centric vs. adult-centric reasoning in child welfare cases.  Sonya was with her foster-then-adoptive family for 8 years.  Suddenly, however, the courts turned her over to her biological father, John McCaul, Jr., a stranger to her.  (Read more about the case here).

A group of child welfare advocates who met during a previous high-profile case (Adoptive Couple v. Baby Girl), represent the child-centric view.  We don’t have “skin in the game.”  Most of us who are fighting to get Sonya home to her parents don’t even know the family (or didn’t, prior to the case).  We simply heard of the case and knew that Sonya must terrified to have been removed from her loving home and handed over to a man she didn’t remember.  Jessica Munday, a public relations firm owner who volunteered on Adoptive Couple v. Baby Girl, is once again volunteering her time to get Sonya home.  Two wonderful attorneys, Kendall Sykes and Arathi Nobles, also are donating an unbelievable amount of time to the case.  These are the people who care so much about children that they cannot sit by and watch while injustice harms children.  People who are willing to spend their time and money to help a child they don’t even know.

How, you ask, could anyone NOT advocate that children are first?  Let’s look at some of their arguments.

A Parent Deserves to Raise his Child, Even if He’s not Fit

John McCaul, Jr. is a violent career criminal.  He may now be reformed and on the right path.  I certainly hope so, for Sonya’s sake.  Some people say that he’s paid his debt to society and should be given a chance to raise his daughter.   Therein lies the difference between a child-centric and an adult-centric view.  The adult-centric view focuses on the father’s needs – his wanting to raise his child.  The child-centric view, however, focuses on Sonya’s needs.  She lived with the Hodgins 8 years.  In every way, they are her parents.  Some of McCaul’s supporters argued, even after she had been with him only a few days, that she doesn’t miss her parents, doesn’t want to come home, and finally feels to be with the family who provided half of her DNA.  They even said she didn’t miss her horse! 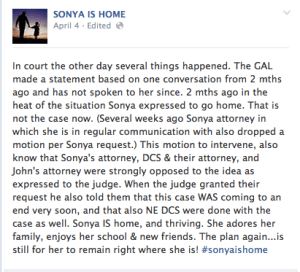 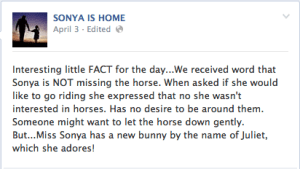 Biology is Best, and Time-Share Parenting

In an adult-centric view, biology is king.  It’s true that our biological imperative, for our own needs or for the survival of our people, is to pass along our DNA.  The adult-centric McCaul supporters, however, call biological parents “real” parents, which assumes that parents who foster for a long time, or who adopt, are not “real”.

The “Biology is Best” apologists believe that adoption is generally traumatic.  They believe that, even for a child with no biological mother and whose father has been in jail most of her life, the biological father deserves to raise her. 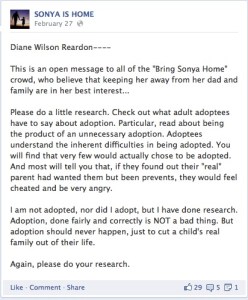 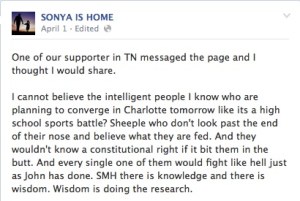 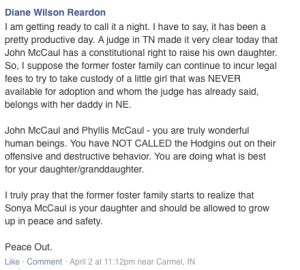 They also believe that relatives should take care of children.  And, generally, I agree.  If there are loving, stable relatives who can and will take care of a child as soon as that child is in need, I think that’s the best option.  (In Sonya’s case, her paternal grandmother was studied for placement, but DSS declined, keeping Sonya with the Hodgins).  That being said, stability is essential for kids.  If relatives can’t or won’t take care of the child immediately, the child needs care.  If a loving, stable family steps up to care for a child in need for 15 of the past 22 months, and the biological parent can’t or won’t step up, s/he should lose her rights.

I was surprised in Adoptive Couple vs. Baby Girl how many of these same supporters thought it was just fine for the biological father to decide he didn’t want to take responsibility for 13 months (9 during the pregnancy and 4 thereafter) but come back for her later.   But biology was most important to the adult-centric supporters.  In their view, however long he waited, the biological father had a right to raise his daughter.  How many other children would be left in the cold if potential adoptive parents knew a biological parent could take the child at any time, harming that child and devastating those parents?  You cannot be a time-share parent.  Parenting is 24-7.

I’m not saying that we shouldn’t attempt to reunify children with their biological parents when parents are ill.  If parents have a problem, and they make diligent and consistent efforts to solve that problem quickly so the child doesn’t have yet another secure attachment severed, they should have that opportunity. I just don’t think that applies in the case of parents who are not ill but who willfully abandon that child.   A life of crime is not an illness; it’s a choice.

While McCaul was in prison, the Hodgins were caring for Sonya.  Yet the other side calls them “child thie[ves]”  and says an ex-felon would be better than the “thieves” to raise Sonya. There’s no regard for the idea that Sonya loves the Hodgins; they raised her for 8 years, and, regardless of what their legal relationship is, from her point of view, they are her parents.

In fact, they say “If I were in John[sic] shoes…I would fight you to the death, come hell or high water before I would lay down and let you take my child.”  This is followed by “John has the God given right to raise his child, and he is!”  Many of us would go to the ends of the earth for our children.  Sometimes that means making painful decisions to give our child the best life possible.   In McCaul’s case, that would have meant considering Sonya’s future when he was considering continuing his life of crime.  John could have prioritized his infant, and gotten a respectable job.  Instead, he chose the vocation of robbing people at gunpoint. 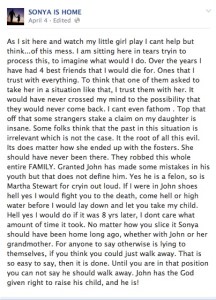 Child-centric Sonya supporters argue that she has a right to be with her parents, who raised her for 8 years, and who call her an adoptive child.  The adult-centric camp says she was never adopted, since a voided adoption is like an adoption that never happened.  Adult-centric McCaul supporters are more concerned with a legal definition of adoption.  Child-centric Sonya supporters are more concerned with how she would experience life – 8 years with the same family, having been adopted and celebrating that adoption! We support the child’s rights over the rights of any other party. 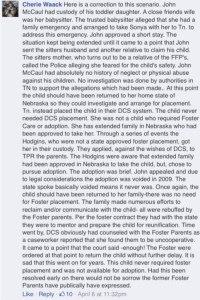 After Stephen Konig, a child-centric Sonya supporter made the argument that Sonya should be consulted, an adult-centric McCaul supporter said of this nine year old child that the courts can’t grant Sonya what she wants, and that “if adults are doing their job, they are making choices based on the best interest of everyone, including a child.”[v] (bold added.) On first reading, that seems reasonable.  A child-centric supporter would say almost the same thing, except that the sentence would change “everyone” to the “the child.”  The sentence should end there.    “The best interest of the child” should be the sole consideration. 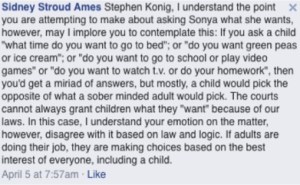 One thing that would happen in the best interest of a child in any court case with a child who’s capable of stating her opinions and ideas, is that parties involved would talk to the child!  No one suggests that a nine year old should make the absolute decision about where she should live.  But she should be consulted!  The question need not be, “Sonya, where do you want to live?”   Good parents treat their kids with respect, including asking their opinions. These are life-altering decisions, and the child should be consulted.  That’s being child-centric.

When Sonya was turned over to McCaul, she was crying.  The police were present.  There are guidelines for transitioning a child from one family to another, which involves gradual contact with the new family, with the known family present at first.  None of those guidelines were followed.   In fact, the Tennessee Department of Children’s Services put nine year-old Sonya in a hotel room with McCaul!  Remember, she didn’t know him.  The court was adult-centric in its decision to suddenly order Sonya’s turnover.   For whatever reason, they valued McCaul’s right to parent, but didn’t value Sonya’s civil rights even slightly.

If we neglect and abuse children, our society is doomed.  Kids have so much potential.  We must help them have loving, stable families so they can reach that potential.  Any consideration of the adults in the situation have to be subordinate to the rights of the child.

I’ll end with this quote from John Simmons, who makes a child-centric statement.  “I am not “for” international adoption. I am not against it. I am “for” children having loving parents and being in homes where they have a support network.”[vi]